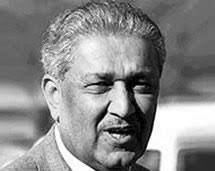 DrAbdulQadeerKhan is also known as Dr. A Q Khan, inventor of the Pakistani Nuclear program passes away at the age of 85. The death of Dr. A Q Khan was due to failure of his lungs Because Dr. A Q Khan was recently positive of Covid-19 Virus and was just now was recovered. He was a precious asset to the Pakistani Nation Because he was the person who made Pakistan a Nuclear Power.

Dr Abdul Qadeer Khan was born in Bhopal, India on April 1, 1936. He emigrated to Pakistan with his family in 1952. He went to D.J.Science College. He enrolled at Karachi University in 1956 to study Physics. In 1960, He was graduated and his degree was based on Solid-State Physics. In 1961, he went to Germany and there he studied Metallurgy at Techincal University, Berlin and from there he made a transfer to the Delft University of Technology in 1965. He obtained a technology degree and joined the Catholic University of Leuven for his doctoral studies in 1971.

He married Henny Qadeer Khan in 1964. He has two daughters, Dina Khan and Ayesha Khan.

In his interview with a Television channel, he said that “I for severe that I would not tell anything to this country”. He said this because he was in pain because he was accused of selling nuclear secrets illegally and in 2004 he was put under house arrest. and he also gave credit to Zulifqar Ali Bhutto because Bhutto started the Nuclear Program when Khan gave a proposal that he is able to make Pakistan Nuclear Power. Bhutto accepted his proposal. He said that “I found that Ghulam Ishaq Khan a true patriot.”

On Saturday, he was not able to breathe properly and he was taken to KRL Hospital. He passed away on Sunday 10 October 2021 in KRL Hospital Islamabad at 7 am. Doctors told that the failure of his lungs caused the death of Dr Abdul Qadeer Khan. He was given a funeral at Faisal Mosque Islamabad. and later on was buried in H-8 graveyard Islamabad. In his funeral prayers, Parliamentarians and other officials were present. and People were also allowed to include in his funeral prayers.

Dr A Q Khan on Science and Education

In 1989, Dr Abdul Qadeer Khan got the Hilal-i-Imtiaz award.

In 1999 Dr Abdul Qadeer Khan got the Nishan-e-Imtiaz award.

Dr. Abdul Qadeer Khan got the title of Nishan-e-Imtiaz.